Riddle/Lateral Thinking: When is Cheryl’s birthday?

7. When is Cheryl’s birthday? 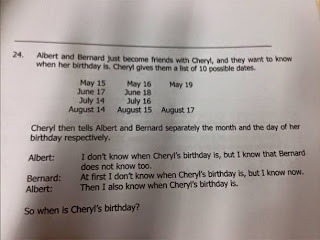 Recently I came across a riddle in facebook, which was originally intended for 5th grade students in Singapore. It created a lots of interest and discussion in the social media and is continuing in doing so… Hope you would like this

However, the formation of the riddle was somewhat confusing, hence I have modified the wordings (continued after the pic) and attached the original question (as a pic) too.

The modified riddle:
Albert and Bernard just met Cheryl. After talking for a while, Albert asked Cheryl , “When’s your birthday?”
Cheryl thought a second and said, “I’m not going to tell you, but I’ll give you some clues.”
Albert and Bernard said in union…its fine J
Cheryl wrote down a list of 10 dates: May 15, May 16, May 19, June 17, June 18, July 14, July 16, August 14, August 15, August 17 and said, “My birthday is one of these”.
Then she whispered in Albert's ear the month — and only the month — of her birthday. To Bernard, she whispered the day, and only the day.
Then she asked Albert, “Can you figure it out now?”
Albert: I don’t know when your birthday is, but I know Bernard doesn’t know, either.
Bernard: I didn’t know originally, but now I do.
Albert: Well, now I know, too!

Q: When is Cheryl’s birthday?

Read it and post your answers as reply to the post. I will be adding my answer if there are no correct answers after 10 replies.


Check other Riddles -
1. Which way to go ?
2. How many socks to get ?
3. The Fake (Counterfeit) Coin
4. The burning thread
5. Apples and Oranges
6. The Deadly Choice
7. When is Cheryl Birthday?
8. Circle of Death
Posted by Saktishree