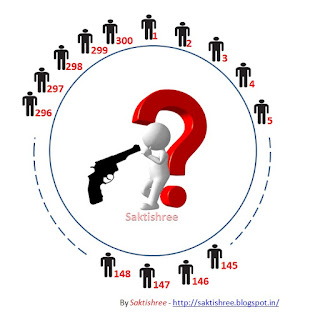 There are 300 convicts waiting to be hanged in the King’s prison. However, there is an innocent man named ‘X’ among the criminals whom the princess wants to marry. The princess requested the king to spare him. The king says, according to the law he is guilty and sentenced to death, I cannot release him. But I will him a chance in a trial named “Game of Death”.

The rules of the trial as follows
1. All the convicts will be standing in a circle with position marked from 1 to 300 in clockwise manner.
2. A gun will be given to the convict standing at position 1, who will kill the one next to him i.e 1 kills 2, 3 kills 4, 5 kills 6...goes on till one person is left.

Now the king tells to the princess, “I am giving you a chance, Decide which position Mr. X to stand to live till end”.

Question: Which position should Mr. X occupy to stay alive?

Read it and post your answers as reply to the post. I will be adding my answer if there are no correct answers after 10 replies.


Check other Riddles -
1. Which way to go ?
2. How many socks to get ?
3. The Fake (Counterfeit) Coin
4. The burning thread
5. Apples and Oranges
6. The Deadly Choice
7. When is Cheryl Birthday?
8. Circle of Death
Posted by Saktishree