Food and eating habits have by no means been at the centre of Maharashtra’s politics for the past many a decade. However since the BJP government came to power last year, food particularly the non- vegetarian kind has become an important political issue in the state. 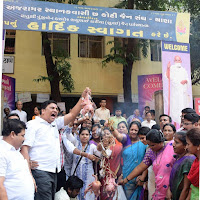 After the banning of beef in March which drew limited protests from largely Muslims and Dalits, the state is witnessing yet another attempt to curb non-vegetarian eating habits.

The MNS which has been fast losing ground and political relevance in Maharashtra has been raking up the issue of vegetarian terrorism in the city. I think the internet is overload with news on #MeatBan that is imposed by the Maha govt because of the annual Jain festival, Paryushan.

People have started criticizing in social media and now are on streets to express their resentment and seek removal of the ban. However, it staged a new low in political arena with Maharashtra Navnirman Sena (MNS)’s Thane unit protested by displaying gates (torans) made out of meat right outside a community hall of the Jain Community in Vishnu Nagar where the festival was going on. They even tried to cook non-vegetarian food right in front of the hall's gate.

Following the ban or protesting it is a personal choice. However, protesting like this is downright disgusting, what’s your take?
Posted by Saktishree